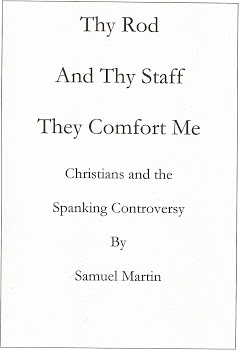 Great news!  Samuel Martin has graciously allowed me to host his book, Thy Rod and Thy Staff They Comfort Me: Christians and the Spanking Controversy.  This is a FREE ebook which you can download at any time and share with your friends. All applicable copyright laws apply.  For more info about the book, please see these 22 Testimonies about the book.

After reading this book, please send your thoughts to Samuel Martin at info@biblechild.com.  He really wants to hear both your critiques and your testimonies.

You can read the book on this site or save it by clicking the Save icon which looks like a floppy disk.  You can also save it to your computer without opening it by right clicking on the  image  and selecting Save As.

If you need more help, please write to me me at HermanaLinda at Whynottrainachild.com

If you want to convert this PDF for your Kindle, I found some options.

Disclaimer, I don’t have a Kindle and cannot vouch for any of these.

Discussion on Amazon about converting through email.

How to Optimize PDF’s for Kindle.