There has been a lot of attention being given lately to the Pearls and the part their book, To Train Up A Child, played in the death of Hana Aleumu “Williams.” So much attention in fact, that my blog could not handle the traffic generated by Google searches and was taken offline from the 19th until today as explained here. So, here is a rundown of the posts and articles I missed posting during that time.

It started with this article on Nov 15: Another couple found guilty of murder for parenting by “To Train Up a Child” by Alicia Bayer of the Mankato Attachment Parenting Examiner.

On Nov 18, the new Facebook page, Online retailers – we urge you to stop selling To Train Up A Child announced that 2 online book sellers, Foyles and Waterstones had removed the book, To Train Up A Child, from their inventory. They continue to put pressure on Amazon and The Book Depository.

Their efforts got the attention of the press causing articles such as 40,000 Sign Petition To Ban Christian Parenting Book Implicated In Murders by Mary Noble at Politix. 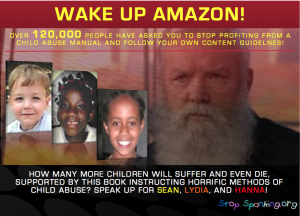 StopSpanking.org created this page which is also going around Facebook.  It links to all 3 petitions and comes with an eye catching picture which is being uses as a meme on Facebook.

I also came across a petition to a smaller book seller, Chapters-Indigo.

On the 19th, Michael Pearl wrote his response to all the allegations.  He still does not understand. He shares quotes from the book which explain that parents must train before disciplining. I’m pretty sure that Hana’s “parents” were trying to train her. He also says that parents must not abuse. Unfortunately, he never defines abuse and does still never rescinds his teaching that parents must require submission 100% of the time.  I’m sure that he strongly believes that abuse is obvious and needs no definition.  The sad thing is that he is wrong.

On the 21st, Anorak asked, Did Christian Teachers Michael And Debi Pearl Train Parents To Kill Four Children?  I don’t know where they got four, but anyway, they research the Pearls’ teachings and come to the conclusion that the Pearls broke no laws and are not accountable, however they cannot understand how any sane person would follow his teachings.

The same day, Carolyn Castiglia of Babble (Courtesy of Disney) wrote, To Train Up a Child Parenting Book Leads to Multiple Child Deaths.  Her article sums up things so far and includes quotes from Alicia Bayer’s article in The Examiner, Michael Pearl’s latest defense and Rebecca Diamond from an article in Salon by Lynn Harris back in 2010.

Upon reading this book review of her ebook, Parenting In The Name of God, C. L. Dyke of Scita Scienda posted this Repost: Hana Grace and the Myth of My Happiness.

On Nov 22nd, Dana of Death By Great Wall wrote her own piece about Hana, I am Devastated and Heartbroken.  Last March she wrote a heartfelt plea to parents of older adopted children not to spank. Thank you, Dana, for bringing that to my attention.

Here is a list of all the current open petitions for your convenience: