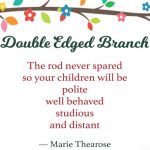 According to a 2021 book by psychologist and formerly estranged parent Dr. Joshua Coleman, mental health professionals are facing a new crisis: generations of older parents cut-off by their adult children over allegations of child abuse. Importantly, Dr. Coleman says that what constitutes adequate reason to end contact has changed: “It doesn’t have to create marked distress in almost everyone,” Coleman writes in chapter two; “nor does it need to produce obvious distress in the traumatized person.” Rather, evaluations are based on the child’s perception: “if I say that you abused, neglected, bullied or traumatized me,” Coleman writes, “then you did.”

Coleman compares the wounds of estranged parents to life imprisonment in a purgatory of guilt and sorrow where only their children can commute their sentences: “Speaking of pain, what are you doing for the holidays, your birthday, your child’s wedding, the birth of your new grandchild, your child’s graduation? These are all events that you never in your wildest dreams thought you’d be excluded from. If you’re like almost every estranged parent, you feel a sense of morbid dread when these days approach.”

Adding salt to these wounds is the fact that estrangement often feels completely unfair to the cut-off parent: “There are plenty of dedicated parents whose children choose to end the relationship. The fact that so many dedicated parents are estranged today shows that this is part of a larger social phenomenon, more than the problem of any one parent.”

Among other relevant social trends, Coleman identifies shifting attitudes about what constitutes physical child abuse as a driving factor: “However loving, dedicated, or invested you were, your adult children have their own scale to weigh your behavior as a parent, one calibrated in a way far different from the one you brought into the nursery.”

Part of that different scale is reflected in modern attitudes about the inappropriateness of whipping, switching, smacking, or paddling. “A common thread in the perspective of estranged children are allegations of harm committed by the parent. This is challenging terrain for today’s parents of adult children because much of what younger generations consider hurtful or neglectful parental acts, would barely be on the radar for parents of almost any generation before.” In fact, despite estrangement being roughly as common as spousal divorce, examples lifted from Coleman’s estrangement-focused psychology practice feature a telling number of physical abuse allegations. Coleman claims that many are based on conduct that previous generations would have considered reasonable and even responsible parenting.

“There’s been a generational change,” says Dr. Robert Sege, lead author of the American Academy of Pediatrics’ policy statement against corporal punishment. “As we’ve woken up to the issues of domestic violence and intimate partner violence there’s been a growing rejection of any sort of violence within the home, including spanking.”

Global approval for physical punishment has been in decline for more than a century. New Jersey banned paddling from public schools in the 1870s, and similar laws have expanded to cover more than 90% of American public school children. Dozens of countries including America’s closest allies list physical punishment of children as a criminal offense. In the U.S., it is against the law to spank children in group homes or foster care, and tales of parents heading to prison for whipping or paddling their kids appear in the news every day. Such developments are cheered by all but a fringe of secular experts, who broadly agree that spanking carries serious risks of physical, emotional and psychiatric harm not offset by any potential benefit.

In contrast to prior generations, the majority of today’s parents have taken to heart the global consensus on physical discipline. According to a Monitoring the Future study of 25 consecutive groups of graduating high school seniors, among adults with children aged 2 to 12 years old, the proportion who said they spanked their child dropped from 50 percent in 1993 to 35 percent in 2017. As a consequence, younger adults may feel a moral responsibility to deny both sympathy and affection to a parent who they consider a serious criminal for inflicting emotional injuries while willfully ignoring widely publicized and accepted scientific evidence.

Coleman points out that the decision to estrange from such a parent is now also likely to be met with considerable support, particularly on social media. “The current model of how we become who we are puts adults on a path of self-discovery where the quest is to hunt down and eliminate — not only those traits that stand in the way of happiness, but the individuals they believe to have put those problems there in the first place.” So while there’s nothing new about ending family relationships, “conceptualizing the estrangement […] as an expression of personal growth and achievement is almost certainly new.”

Coleman’s heart is clearly for healing and protecting estranged parents — so much so that I, as a survivor of child abuse, spent an hour crying in the shower after reading this book, which is filled with Coleman seeming to minimize crimes like child torture and rape with statements like: “however small or great your mistakes as parents, those mistakes don’t mean that living the rest of your lives without your children or grandchildren is a just punishment for whatever complaints they have about what you did or didn’t do.”

Ultimately, Coleman is forced to admit that most of the estranged children he contacts demonstrate little interest in relating to their parents. By his own estimates, more than two-thirds of estranged adult children he approaches either ignore or openly rebuff his guided attempts at reconciliation. “Many” use mediation sessions to berate their abusers for as long as the therapist allows it. “It’s one thing for an adult child to say, ‘I resent that you weren’t there for me more, that you were critical, self-absorbed, whatever.’ But it’s another to scream insults and tell them they should die.”

Coleman’s main job appears to be helping parents come to grips the heartaches of being permanently exiled. He offers advice on what to do with the estate that your children do not want, how to respond when your son or daughter files for a restraining order, and even how to pre-plan how you’ll excuse yourself for a cry when your dinner companions start sharing photos of their grandchildren. “The message of estrangement,” Coleman writes, “is that you can have your most treasured person torn from you and there’s nothing — or seemingly nothing — that you can do about it.”

Supported by case-studies lifted from Dr. Coleman’s psychology practice, the author’s latest, titled Rules of Estrangement, (Harmony Books, Releasing 2021) is a brisk read that packs valuable insights into a few well-thought-out pages. Coleman clearly has little empathy for victims or survivors of child abuse, but his work is a harbinger, making it clearer than ever that the debate over legally sanctioned family violence has already ended. For a while longer, America’s governing generation will deny children legal protection, but nothing protects parents from their children’s moral outrage: “some parents have been so destructive when the child was young that there is little left to build a foundation upon, even if the parent is able and willing, later in life, to make amends.”

M. Dolon Hickmon explores the intersections of religion and child abuse in essays published around the web, as well as in the pages of his critically acclaimed novel, 13:24 – A Story of Faith and Obsession.