ITV News reports that Mr. Pearl is Delighted Over Calls to Ban His Parenting Book.

Mr Pearl told the radio station: “I was delighted to hear that Parliament might ban my book, if they do, I will immediately advertise it as ‘the book banned in the UK’ and…we will end up selling another 100,000 books directly to the UK.”

Now, to clarify, the book would only be banned on the Amazon.co.uk website. I have not heard anything about making it illegal to sell the book in the UK. However, if it is banned on a UK website, it is technically “banned in the UK,” at least in one small part of it. Therefore, he apparently does not feel that it would be misleading to promote the book at “banned in the UK.”

@ADadCalledSpen writes More On To Train Up A Child and has some questions. (Disclaimer: some language on that site)

How, can a book sell more if it’s banned from sale? How can you sell something that can’t be sold? That would be illegals[sic].

So, we see now that the book is not banned everywhere in the UK, only on Amazon.co.uk. Unless I’m confused, that does not stop direct sales of the book from No Greater Joy (Owned by the Pearls) and other small online book sellers. And even if the book should become illegal to sell in the UK, that would not stop Mr. Pearl from selling it because he answers to a Higher Authority. He is convinced that God wants him to sell the book. It is a ministry to him. He in convinced that his parenting advice produces happy and obedient children. In fact, it almost always does produce obedient children who appear to be happy. Due to the Stockholm Syndrome, many even grow up believing that they had a wonderfully happy childhood and use the training on their own children. So, Mr. Pearl sees any effort to thwart his efforts as persecution from the ungodly, which any Godly Christian should expect. *Le Sigh*  Even the efforts of Christians to explain to him why his teachings are dangerous have been met with condensing arrogance. He is entirely sure that he is right and everyone else is wrong.  I hope this helps explain the situation a bit better. 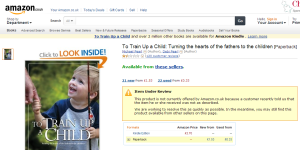 Now, Amazon.co.uk has pulled the paperback version of To Train Up A Child but the Kindle version is still available.  Here is what you will find on their site. I also heard that most of their versions have been removed from their Danish site:

Happy to report that TTUAC is also removed from Amazon.de except for this 1994 edition: http://t.co/KHdabJuMDD @WhyNotTrain

Also, I was not aware that the book is also available on iTunes.   It is only fair to  ask Apple to pull the title as well, as @ADadCalledSpen has done here.

By the way, here is the book on Google Books.  They do not offer an eBook but tell you where you can find it in print (not on Amazon) and shows the reviews from Goodreads, and Christianbook.com.  Most people who give the book good ratings do so because there is much good advice mixed in with the bad advice.  Some say that there is more good advice than bad.  The problem is that the bad advice is so very bad and mixing it in with good advice only makes it insidious and even more dangerous.  It is like oleander honey.  This is not a case where one can “swallow the meat and spit out the bones” because they are sharp fish bones which can easily choke someone.

While I’m at it, I would also like to dispel the myth that the book calls for hitting children with pipes and whips.  It does not. It calls for hitting children with a switch, belt or plastic plumbing supply line, which is flexible and whip-like. I mention this because when things we claim can be disproved, it casts doubt on everything we say.  Get the true quotes here.

Last but not least, here is MP Nadine Dorries on Adrian Goldberg’s radio show explaining why Amazon should stop selling To Train Up A Child.